Recently I was reading about how there is a trend called painter fingertips which started because of Michele Lamy. Rick Owens and Michele Lamy make couture clothing- mostly make black and white(monochromatic) with the exception of Fall 14 which had sepia tones as well. Michele reminds me of my best friend from when I was 8, Thyra Warburg.

When I met Thyra she was around 85 years old and she changed my life forever. She was full of joy and childlike wonder. Her apartment was literally stuffed with paintings that she had created. She had been a professional ballerina, in the resistance in the war, and she was the happiest, oldest person I had ever met. When I would come to visit her she would stop in the foyer before opening the glass doors and yell, "BRANDY!" and do the splits. She would run across the grass and up the sidewalk in her mismatched socks and give me a big hug. She was a sprite and maybe 90lb including her eccentric clothing. She did 100 stretches everyday in the bathtub. She had a new boyfriend when she was 93. She went to yoga several times a week. She won a handstand contest even though she had a broken arm at the time. She showed up to our pool party in a bathing suit made completely of strings. And she wore red leather pants to our Christmas dinner party haha
We were kindred spirits from the moment we met.

The reason Michele Lamy reminds me of Thyra is because in the documentary Michele speaks about luxury and what it means to her. Michele spoke in the documentary about how luxury is going to the gym and feeling your body, spending time with your friends and family when you really connect with them, and preparing food and enjoying savouring it. Luxury is really the small things-which are the big things. Yoji Yamamoto speaks about this also. He is also a very famous couture designer and he often speaks about how he wants to make something special and important- little things being the big things.

I really want to paint Michele Lamy. She has fascinating eyes. Eyes tell you everything. Here are some pics of that "painted finger" trend I mentioned Michele started. Now I don't have to wash my hands after I paint! ;) haha 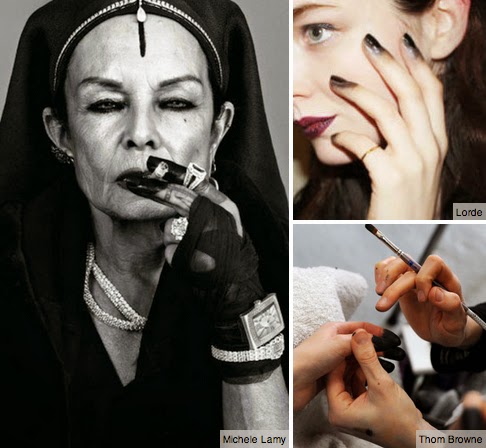 Posted by Brandy Mars at 3:16 PM No comments: